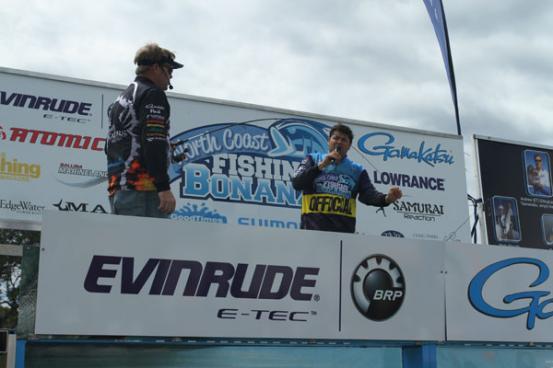 It is on again. The North Coast Fishing Bonanza, in its third year, will be held in Ballina over weekend of September 27 to 30 2012. Last year the event was a resounding success with close to 300 competitors and over 3000 visitors to the fishing competition and marine show held at the Ballina Seagulls rugby field. Gamakatsu and Evinrude once again are the major sponsors of this event and will, with the help of some other well known brands, ensure that there is once again something for everyone who attends.

Whether you prefer to fish offshore, in the estuary, off the beach, rocks or in the dams, the North Coast Fishing Bonanza has a species for you and with Adult, Cadet and Juniors categories, no matter what your age, you will be well catered for.

Even if you don’t catch a fish, every competitor will go in the draw to win one of two awesome boat, motor and trailer packages. The adult draw is for a nifty family runabout while the cadet draw is for a smaller tiller steer estuary fisher.

Other sponsors include Lowrance, Atomic and Samurai so there will be mountains of give-aways throughout the entire event. During the catch, photograph and release competition, anglers are also encouraged to provide images for the media and you could end up in this some well know fishing magazines with with your catch.

The fishing tank display will also be popular with Michael Starkey and Jay Morgan from Frogleys Offshore conducting talks for visitors on some of the finer arts of fishing with lures in the local waterways. Both are locals to the area so are well intune with local tricks. In addition the incredibly realistic fishing simulators will be on display with a competition on the cards for anyone who thinks they’ve got what it takes to tackle a sailfish, tuna or GT on these awesome machines.

The NCFB has a facebook page, www.facebook.com/fishingbonanza and website, www.fishingcomps.com.au/ncfb for competitors to keep up to date with the event, so if you are in the area next October, or simply planning a holiday, check it out.

The entry fee alone could see you pick up a boat as the lucky door prize!!